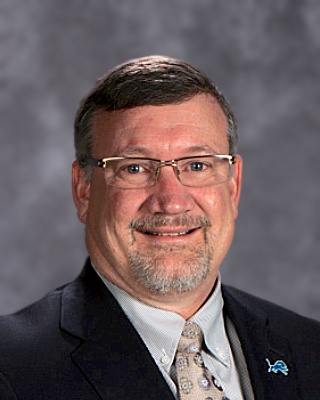 Mr. Nusser is in his 35th year in education and is currently the Principal at Lyons High School. After graduating from Emporia State University, he spent thirteen years in the classroom as a social studies teacher and coaching football and track in Peabody, Emporia and Lyons. Mr. Nusser was a classroom teacher and the head football coach at Lyons High School for nine years and was the head boys’ track coach for eight years before becoming the Assistant Principal/Athletic Director at Lyons High School. After twelve years as the AP/AD he became the principal, a position he has held for the past nine years. He is married to his wife Beth, who is an Early Childhood Special Education/Pre-School teacher at Park School. They have two grown children, Tegan and Anna, who both are Lyons High School grads. Tegan is married to his wife Kirsten. Tegan is currently a mathematics teacher at Wamego High School, while his wife Kirsten is a middle school math teacher at Washburn Rural Middle School in Topeka. Anna is a social studies teacher at Chapman High School and is an assistant coach for several sports.