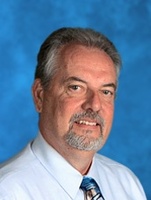 My name is Bob Turner. I am beginning my twenty-seventh year in Education and my twelfth year as a Building Principal in USD 405 and my eighth year at Central Elementary School.

I grew up in Hutchinson and graduated from Nickerson High School in 1975. Received my AA from Hutchinson Community College, transferred to Wichita State University and graduated with a Bachelor of Science degree in Elementary Education. I obtained my Masters in School Leadership from Baker University.

I began my teaching career in Haven and USD 412. I was an At-Risk coordinator for the district for two years and then moved to Haven Middle School where I taught math, history and physical education.

My final two years in the district I was the district Athletic Director and K-6 Physical Education teacher. In 2005 I accepted a position with the Jewell School district and became their District Assistant Superintendent and District Administrator.I

I left Jewell in 2008 to move closer to home and accepted the Principals job at Central Elementary. After one year I moved to Lyons High School as the Assistant Principal and Athletic Director. I returned to Central for the 2013-14 school year.