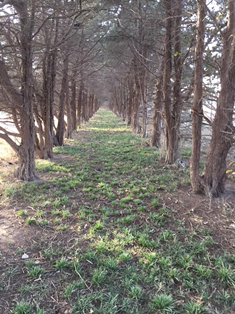 FROM FRISBEES TO DISC GOLF

The concept of disc golf itself, however, has a long and blurry history. Even a question as simple as “Who first played disc golf?” has no clear and concise answer. In his Brief History of Disc Golf on PDGA.com, Disc Golf Hall of Fame member Jim Palmeri #23 responds to that question as follows:

“Sorry, but this turns out to be impossible to answer. There are many historical accounts of people playing golf with a flying disc, some of which pre-date the advent of the plastic flying discs by many years. Each account was an isolated instance of recreational disc golf play, and none of the participants knew of anyone else playing disc golf. Indeed, most of these instances were isolated not only geographically but also isolated in time, so they couldn't have known about each other.”

In 1965, George Sappenfield #376 was a recreation counselor during summer break from college. While playing golf one afternoon, he realized that the kids on his playground could play the golf game with Frisbee discs. He remembered his idea when in 1968 he finished college and became the Parks and Recreation Supervisor for Thousand Oaks, California. 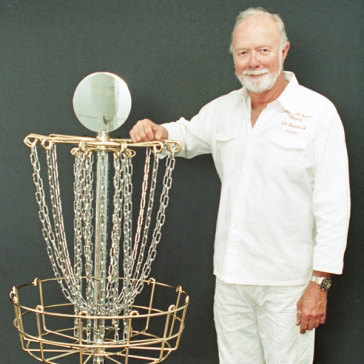 George contacted the Wham-O Manufacturing Company (at the time, Wham-O was THE disc company) about his idea and asked if they could help out with his plan to hold a Frisbee golf contest for his recreation program. Wham-O sent Frisbees and Hula Hoops to use as the targets. The next year, George talked "Steady" Ed Headrick of Wham-O into including a Frisbee golf event in the All-Comers Frisbee Meet that Ed and Wham-O were planning to hold at Pasadena's Rose Bowl as a promotional event.

Unfortunately, that was the last significant mention of Frisbee golf by Wham-O for over seven years. Goldy Norton was Wham-O’s west coast publicist. In 1972, he wrote the very first book on the emerging sport, “The Official Frisbee Handbook” in which he described the wide range of activities and events that could be played with a Frisbee. Surprisingly, there was only a very brief mention of the concept of Frisbee golf, and that was buried in a section titled “the obstacle course.” There was no further description of Frisbee golf anywhere else in the book. Apparently, for some reason, at that time, disc golf didn't fit into the promotional plans that Wham-O had for its Frisbee brand flying discs.

But, the game of disc golf did indeed exist. Despite having never heard of the International Frisbee Association (IFA) that Ed and Wham-O had put together, or even seeing a copy of the IFA Newsletter, Jim Palmeri, his brother, and a small group of people from Rochester, NY, had been playing disc golf as a competitive sport on a regular basis since August of 1970, including tournaments and weekly league play. By 1973, they had even promoted two City of Rochester Disc Frisbee Championship events which featured disc golf as the main event.

In 1973, this avid group of disc golfers first happened upon a copy of the IFA newsletter. They were amazed to hear of the Frisbee culture that existed well beyond their little sphere of activity. They decided to make the 1974 City of Rochester Disc Golf Championship a national tournament to find out just how many other people around the country were playing disc golf. They called the event the American Flying Disc Open (AFDO), and to attract the attention of the Frisbee community, they put up a brand new 1974 Datsun B210 to be awarded to the winner.

The burgeoning interest in the game of disc golf that grew rapidly among Frisbee players and IFA members during the rest of 1974, and in the summer of 1975, grabbed “Steady” Ed’s attention. As an executive at Wham-O, he began to reassess the value that disc golf might hold for their business.

Ed created a new Sports Promotion Department at Wham-O and hired the winner of that 1974 AFDO, Dan “Stork” Roddick, to be its director. With feedback from Stork, George Sappenfield, and the fledgling but rapidly growing disc golf community in general, Ed decided to include disc golf as an event in Wham-O’s upcoming 1975 World Frisbee Championships.

In 1975, “Steady” Ed installed the first official disc golf course at Oak Grove Park in Pasadena, Los Angeles County, California, with the targets being nothing more than permanent poles placed into the ground for targets. Disc Golf Pole Holes would later replace the poles in the ground in 1976, causing a massive increase in disc golf traffic on the property. 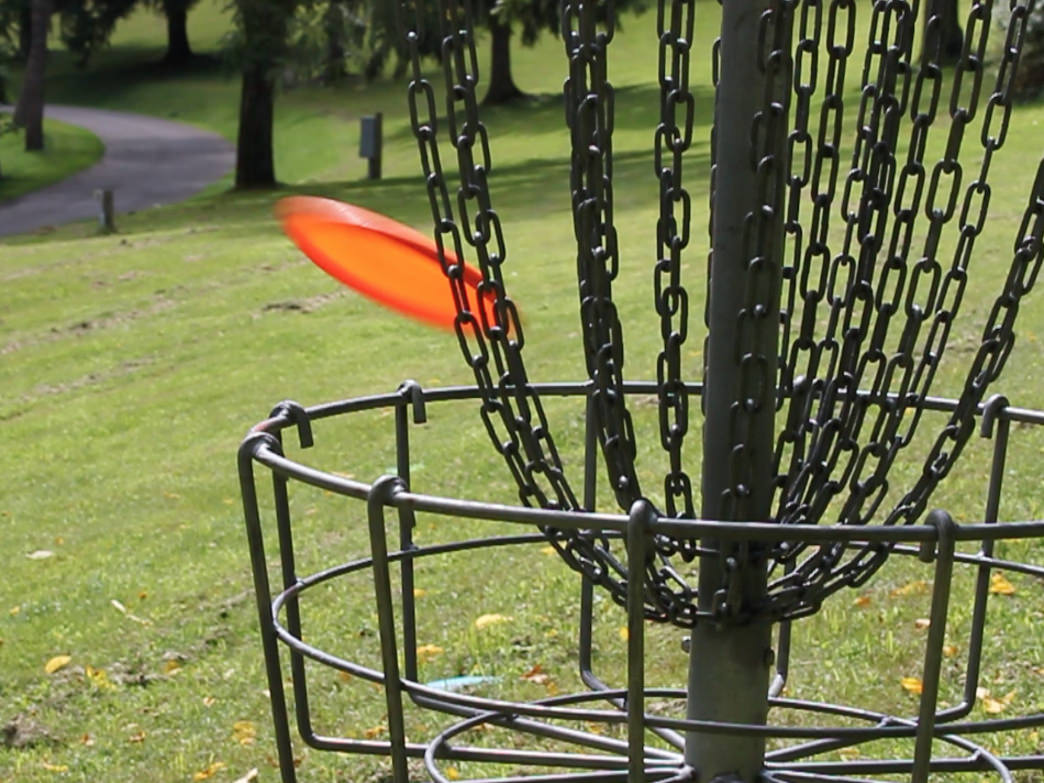 Soon after inventing his basket and starting his company, Ed founded the Professional Disc Golf Association. He modeled his PDGA after the International Frisbee Association that he created at Wham-O a decade earlier. In the summer of 1976 he sent out a letter to roughly 100 of the top players in the country, inviting them to join the PDGA. The cost would be $10 (about $45 in today’s money) for a lifetime membership.

It was at the next Disc Golf World Championships in 1984 at Rochester, New York that Ed handed over control of the PDGA to a group of players led by Ted Smethers #1159. At the player's meeting, Ed ceremoniously handed Ted a glistening green bottle of Genesee Cream Ale as if bestowing the keys to his disc golf kingdom. This was a key moment in PDGA and disc golf history alike; the players would now begin to assume the leadership roles in the organization.

Ted, and other players who wanted to help, spent two years working on various projects including several drafts of a constitution. During this time Ted, Ed and the team butted heads but they made progress. According to Rick Rothstein’s Disc Golf World News (the source of accurate informative disc golf news for decades), the players approved a steering committee of Ted Smethers, Ed Headrick, Lavone Wolfe #580, Patti Kunkle #283, and Roy Culbertson #1814 at the 1985 Disc Golf World Championships in Tulsa, Oklahoma.

The first formal all-member election for the first PDGA board of directors was held in late 1986. The first board—Ted Smethers, Rick Rothstein, Tom Monroe, Steve Wisecup #1467, Darrell Lynn #784, and Joe Feidt—began to chart a course through fits and starts that would gradually allow the PDGA to grow into the juggernaut it is today.